Below Deck fans wonder if Katie Glaser will lose Ross McHarg. She shocked fans when she kissed the boatswain during Monday’s episode of the Bravo series. Katie admitted in her confessional that she likes Ross because of how genuine he is. However, fans don’t think Ross is being genuine about his feelings for Katie.

He admitted in his respective confessional that he doesn’t do long-term relationships. Ross gave off player vibes. He’s been in polyamorous relationships with multiple people. Below Deck fans also noticed that he got close to Alissa Humber during the latest crew outing. Keep reading to learn more.

A new Below Deck love triangle

Love triangles are as common as the boatmances that happen on the show. Suddenly, Ross finds himself in the midst of a love triangle with Alissa and Katie. Below Deck Season 10 Episode 4 called “The Thunder From Down Under” showed that something is brewing between them. It started with a blossoming romance between Ross and Katie.

The two are enjoying their time together on the boat. They even kiss, which comes as a surprise to fans. Ross and Katie try to entertain the charter guests with a beach lunch. The two colleagues get inappropriate when they travel by boat. Ross makes Katie sit next to him and then on his lap.

They also share a kiss even though they’re on duty. The two enjoyed the kiss so much that they almost forget about the charter guests. Ross and Katie serve them sorbet later on the beach. Ross also flirts with Katie during the beach lunch. In her confessional, Katie shares why she likes him so much.

“Ross definitely has that sweet personality. He is, you know, funny,” Katie said. “It’s fun to have someone you connect with.”

The Below Deck newbie explained that she’s tired of “f***boys” and wants someone who’s serious about her. Later that day, Katie enters Ross’s cabin and they share another kiss. They say goodnight to one another. Unfortunately, for her, Ross is not the man she thought he was.

Katie Glaser opens up about the love triangle

The drama on Below Deck Season 10 is sure to deliver. There will be a rough patch in their relationship. Alissa Humber wants to hook up with Ross as well. She doesn’t care if she hurts Katie’s feelings.

Katie admitted that they ended up in a “rocky” love triangle, per meaww.com. She shared that the toughest part of the situation was putting up with either Alissa or Ross and Alissa together. Katie has nothing against Alissa though. At one point, she worries whether she’s going to take Ross away from her. 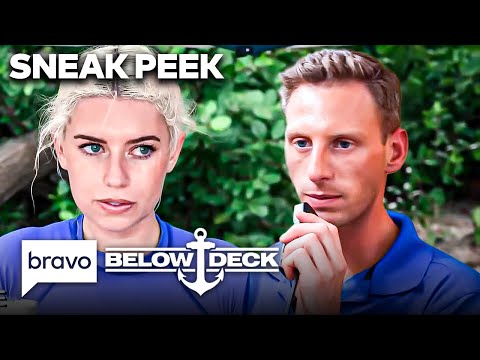 What are your thoughts, Below Deck fans? Do you think Katie Glaser will lose Ross McHarg? Sound off below in the comment section.

New episodes of Below Deck Season 10 air on Mondays on Bravo at 8 p.m. ET.