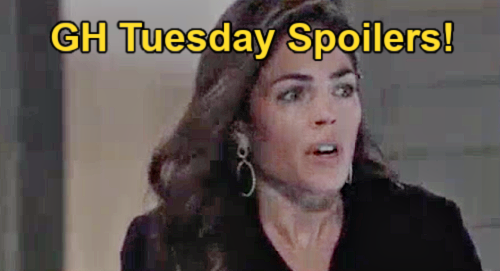 General Hospital Spoilers Tuesday, January 3 – The Hook is Back!

. Circling back to a previous victim that managed to escape The Hook’s wrath, it’s possible Josslyn ‘Joss’ Jacks (Eden McCoy) might be the next poor soul The Hook takes a stab at.

Elizabeth is starting to have doubts about how her plan with Nik is going to work out. What will they do with Esme Prince (Avery Kristen Pohl) after she gives birth?

How will Nikolas explain why he suddenly has a baby? Why isn’t he able to deliver answers?

Nikolas sure is adamant that no one is ever going to find out about what they’re up to. How can he be so sure?

Is Liz ready to demand answers to these questions, and how will Nikolas answer them in a way that Liz will be satisfied with continuing to help him?

What has Spencer so shocked that he can barely form words? Trina Robinson (Tabyana Ali) just might lay the truth on Spencer, and it’s going to draw them closer. Sprina fans won’t want to miss this episode.

The new year brings many new questions for Dante, who isn’t sure he’s comfortable with the slack he’s been cutting for his dad, Sonny Corinthos (Maurice Benard).

Will Dante decide to move forward with a firmer fist, or might Sam convince him it’s okay to look the other way?

Get ready for it. Carly is going to gush over her new guy well into the new year.

You’d never know she was holding such a massive secret from him that threatens to take down their relationship and friendship in one swift move.

It’s going to look like Britt is headed out of town, but we know it’s not always that simple in the land of Port Chuck.

At the last minute, Britt could be taken hostage by someone — like Victor Cassadine (Charles Shaugnessy), leaving everyone to think she dipped out on her own terms when she’s really in trouble.

She might also have a change of heart and decide to say. Could someone sway her decision, such as Cody Bell (Josh Kelly)?

Which storyline are you most looking forward to following on GH on Tuesday, January 3rd? Let us know, and keep checking back for more GH news and spoilers.