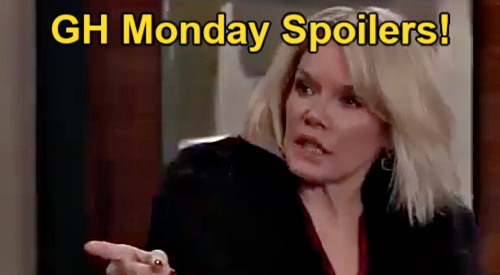 That could lead to Sonny questioning Spencer’s motives and assuming revenge is a big factor.

Spencer may once again insist this is about protecting his sibling, but Sonny may have his doubts about this working out well.

Even if Spencer can win in court, is he really ready to step up as a father?

Based on what Spencer says, Sonny may think he’s proving that he can’t be the dad this baby needs.

Despite Sonny’s hatred for Nikolas Cassadine (Marcus Coloma), he understands the pain of having an adult son take away a child since Michael Corinthos (Chad Duell) once gained custody of Avery Corinthos (Ava and Grace Scarola).

That may affect Sonny’s view of the situation and the advice he gives.

In the meantime, Laura Collins (Genie Francis) will pay Nikolas a visit and realize something has just happened.

Nikolas will admit that Victor Cassadine (Charles Shaughnessy) is trying to force him to sign over the deed to Spoon Island and give Ava Jerome (Maura West) Wyndemere.

Although Nikolas will want Laura to back him up and perhaps speak to Ava on his behalf, she may side with his soon-to-be former wife.

After everything Nikolas has put Ava through, she deserves a reward for surviving it!

Even if Liz isn’t ready to forgive, Carolyn will pour her heart out and hope she can at least try to make amends.

Elizabeth will understandably be stuck on the past since Carolyn’s mind tricks caused her to repress traumatic memories for so many years.

Carolyn will also stand by her decision to support Jeff Webber (William Moses) following his messy betrayal, but Liz will wonder if her mom loved him more than her.

While Carolyn seeks another chance with Liz, Heather Webber (Alley Mills) will do damage control with Esme as well.

Perhaps Heather will admit she probably came on too strong and just act like she was excited to have a new friend.

Esme will sit and talk with Heather again, but she’ll remain uneasy around her.

As Esme reflects on all the enemies she’s made and how she can’t remember her actions, Heather will provide reassurance.

Now that Heather is in the picture, she’ll make it clear that Esme no longer has to worry.

Heather will insist she’s got Esme’s back, but Esme may continue to wonder why Heather seems so overprotective.

Although Heather will be dying to come clean about being Esme’s birth mother, she may not offer updates on their true link just yet.

Until then, Dante Falconeri (Dominic Zamprogna) will raise the stakes with a new deadline for Heather.

Unless Heather can deliver helpful information regarding “The Hook” soon, she’ll be headed back to the asylum – far away from Esme!

That could give Heather extra motivation to extend her Spring Ridge stay or bump up her escape timeline.

The wheels are already turning for Cam, who’ll wonder if Dex is the reason Josslyn broke up with him.

Cameron will eventually ask Josslyn if she slept with Dex before the split, so Josslyn will confirm that she did.

In the midst of all this devastation, Josslyn will ask Cameron to keep quiet about her secret romance to avoid stirring up Sonny’s wrath.

At GH, Ava will recognize Mason (Nathanyael Grey) from the night of her hook ᴀᴛᴛᴀᴄᴋ and will insist he was most definitely there.

Although Mason wasn’t actually responsible for stabbing Ava, she might threaten to throw suspicion in his direction.

Since Austin Gatlin Holt (Roger Howarth) has been so kind to Ava, she may repay the favor and try to force Mason to leave his cousin alone.

General Hospital spoilers say Ava and Austin will strengthen their connection, so a new love match may be in the works.

CDL will have all the fantastic General Hospital spoilers, updates and news you need, so make us your top GH source.